Finally! Christianity is Not Great Went to Print!! 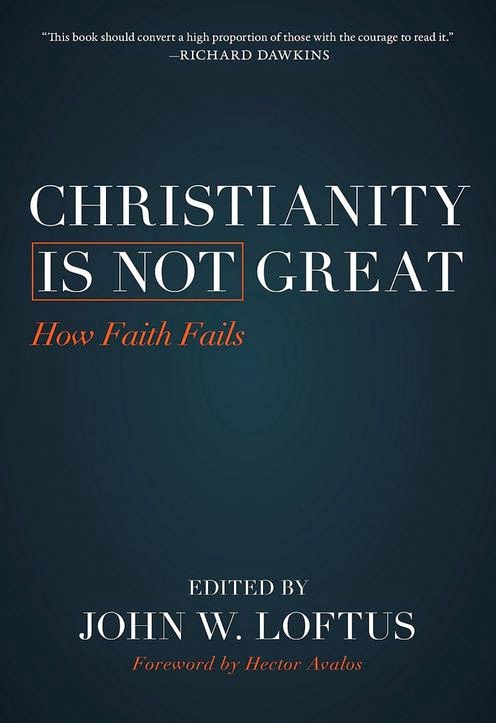 As the editor, this anthology consumed a great deal of my time in the past few months. It went to print this past week and is scheduled for an October 21st release date! I sure hope Christians have the courage to read it and think through the issues we raise. I hope both budding and accomplished Christian apologists do likewise, since, if we're wrong I want to know. I sure hope atheists, agnostics, deists and people of different religious faiths like it and favorably recommend it on their blogs, podcasts and videos on YouTube. We non-Christians are in this together as we face overwhelming numerical and political odds against Christians, especially the religious right in America. To pre-order it on Amazon, where you won't be charged until it ships, follow this link.

The following clip from "The Wrath of Khan" expresses my thoughts as I ponder the impact of this anthology:

No violence is intended. It's purely metaphorical. We do battle against ideas though. ;-)

Prometheus Books is the premier atheist publisher of our generation and I'm very happy to be a PB author/editor.

Below is the official description of the book and finalized Table of Contents:
Prometheus Books New Releases – October 21, 2014
Religion / Skepticism

Christianity Is Not Great:

In part one, the contributors dissect the many problematic aspects of religious faith. They repeatedly demonstrate that, with faith as a foundation, almost anything can be believed or denied. And almost any horrific deed can be committed.

In parts two through four, the authors take a good hard look at many of the most important political, institutional, scientific, social, and moral harms committed in the name of Christianity. These range from the historical persecutions of the Inquisition and witch hunts to the current health hazards of faith healing.

1) Religious Violence and the Harms of Christianity, by John W. Loftus


Part One: How Faith Fails:

2) The Failure of the Church and the Triumph of Reason, by Robert G. Ingersoll

3) The Folly of Faith: The Incompatibility of Science and Christianity, by Victor J. Stenger

5) Love Your Enemy, Kill Your Enemy: Crusades, Inquisitions, and Centuries of Christian Violence, by David Eller

6) Thou Shalt Not Suffer a Witch to Live: The Wicked Christian Witch Hunts, by John W. Loftus

7) They Will Make Good Slaves and Christians: Christianity, Colonialism, and the Destruction of Indigenous People, by David Eller

8) The Slave is the Owner’s Property: Christianity and the Savagery of Slavery, by John W. Loftus

9) Christianity and the Rise of American Democracy, by Richard Carrier

10) The Dark Ages, by Richard Carrier

11) The Christian Abuse of the Sanctity of Life, by Ronald A. Lindsay

13) Christianity Can Be Hazardous to Your Health, by Harriet Hall

14) Christianity and the Environment, by William R. Patterson

16) The Christian Right and the Culture Wars, by Ed Brayton

17) Woman, What Have I To Do With Thee?: Christianity’s War Against Women, by Annie Laurie Gaylor

19) The Crazy-Making in Christianity: A Look at Real Psychological Harm, by Marlene Winell and Valerie Tarico

22) Only Humans Can Solve the Problems of the World, by James A. Lindsay

23) Living Without God, by Russell Blackford

Christians will want to consider how to best deal with it, so I'll offer some suggestions. ;-)
John W. Loftus at 8/24/2014
Share