Jesus and Other Demigods in Classical Antiquity 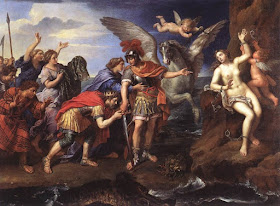 Let us begin with a basic definition. What was a “demigod” in Mediterranean antiquity? A demigod was any individual described as having one divine parent and one human parent, typically conceived by a male god copulating with a female mortal. Hellenistic and Roman society framed its existence within a dispensation that Hesiod described in his Works and Days as the Iron Age, a more mundane period just following the Age of Heroes. Ancient society romanticized about a past age when heroes and demigods walked among mere mortals. They saw these traditions continue in their present age in the form of honorific exaltation. As a means of canonizing the most significant figures, ancient society mythologized exceptional persons with divine birth and immortality among the gods. This was the governing paradigm for deification in the time and contexts whence earliest Christianity arose, i.e., in the principal urban cultural centers of the Roman world.

In my last essay, Confident Atheism: Reflections on the Golden Bough, we discussed the all-too-human origins of the mythological traditions that fill what came to be known as the Christian Bible. In the course of the argument, I indicated that the theologies variously arising in these texts showed much the same fluid, adaptive, syncretistic character as seen in any culturally constructed theology throughout times and societies. Indeed, from a bare humanistic standpoint, these divine constructs in the sacralized Christian texts naturally reside under the larger class of all theologies, which naturally resides under the larger class of all mythologies, which naturally resides under the larger class of all wholly-human cultural production. That the largest religion to emerge from classical antiquity should augment and adapt the prevailing theological-mythic paradigms of that time should come as no surprise. In my own Resurrection and Reception, I have articulated this observation at length, finally writing (p. 13):

Could any fresh, third-party observer not immediately perceive the pattern: a Judeo-Christian version of Zeus-Jupiter, with his own storied demigod son born of a mortal woman?

Looking specifically at the New Testament, we find the Christian deity named “Father,” the first emergence of this tradition within biblical literature. In that world, i.e., the cultural centers of Roman antiquity, “Jupiter” was supreme Father of gods and men, a name derived from Old Latin meaning “Sky Father” or “Sky Daddy” (an etymological derivation from Iou Pater). The Romans had adapted the Greek Zeus, a tradition of appropriation known as interpretatio Romana, namely, the Romanization of neighboring deities under the Roman pantheon. In accordance with Hellenistic tradition and Greco-Roman interpretation, the Jewish deity became frequently identified as Zeus-Jupiter during Hellenistic and Roman governance of Judea. As I survey in Resurrection and Reception in Early Christianity, Hellenized Jews characteristically accepted this equation to the extent of (repeatedly) revamping the Gerizim Temple and the Jerusalem Temple as in worship to Zeus-Jupiter, analogous to the Ptolemaic (Egyptian) syncretism Ammon-Zeus. (See my own book, Chapter 1, for a brief history of this phenomenon)

Just who was this Zeus-Jupiter of Mediterranean polytheology? Following the canonized work of Hesiod (in his Theogony), we see a deity much like the Yahweh of Hebrew Scriptures, a supremely powerful god of mountain, thunder, and sky, master judge of all. Unlike the Hebrew deity, however, Zeus-Jupiter had offspring with mortal women, siring a vast gallery of demigods in classical myth and legend. In Resurrection and Reception, I give a lengthy, though not at all exhaustive, catalogue of such individuals. These tended to fall under two different types: fictive figures of pure mythology (i.e., from the Age of Heroes, e.g., Heracles, Castor, etc.) and lionized figures of legend and sacred history (i.e., from the Iron Age, mostly deified rulers and founding figures). Alexander and his successors in the Hellenistic kingdoms, as well as the Caesars (many granted the appellation divi filius) often obtained this honorific exaltation in sacred legend and propaganda. In my next essay, we shall look at the divine birth myths found in the the New Testament Gospels, as these developed out of Mark, and their conventional and mimetic relation to other prevalent tales of divine parentage in Hellenistic and Roman culture.
Connect with Richard C. Miller on Facebook.
Richard C. Miller at 12/18/2016
Share