The Jesus in the Gospels Never Existed! 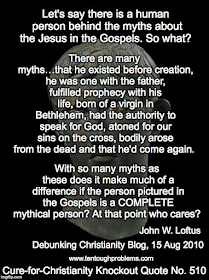 [Written by John W. Loftus] Yep, that's right, although I have not changed my mind about anything. It comes from something that mythicist Steven Carr recently wrote:


There was an actual person behind the Popeye traditions.

So Popeye existed, according to mainstream Biblical historian criteria, as the character of Popeye was based on a real person.

Nobody would seriously doubt that Popeye was based on a real sailor who liked to get into a fight, if they studied history properly.

And , according to mainstream Biblical historical criteria, Sherlock Holmes existed, as the character in the stories was based on a real person.

All you need for somebody to exist is for that person to be based on a real historical person.

This is mainstream history, and mythicists should go to school and learn this.

So Popeye and Sherlock Holmes existed, according to all the criteria of mainstream Biblical history.

However, when people say 'Jesus' existed, they really want something more than a historical person behind the story.

They want Jesus to have more of an existence than Popeye or Sherlock Holmes.

This comment is probably the best statement of the problem in so few words I have read. I think it highlights the main issue that deserves further discussion. Let's say there is a human person behind the myths about the Jesus in the Gospels. So what? There are many myths about such a person to be found there, significant ones, primarily that he existed before creation, he was one with the father, fulfilled prophecy with his life, born of a virgin in Bethlehem, had the authority to speak for God, atoned for our sins on the cross, bodily arose from the dead and that he'd come again. With so many myths as these does it make much of a difference if the person pictured in the Gospels is a complete mythical person? At that point who cares? Why then the passion over this issue? Why does it divide atheists and agnostics like it does? Why issue challenges to other atheists/agnostics like to Bart Ehrman, who emphatically denies the mythicist position?

If there was a human being who was the basis for the Jesus figure in the NT, he is dead now.

If there was not a human being who was the basis for the Jesus figure in the NT, so much the worse.

I think that at best the founder of the Jesus cult was an apocalyptic end times prophet, as I argued in a chapter for The Christian Delusion

, but even that's a "best case scenario." Historical studies are fraught with so many problems I could be wrong.

So regardless of this one disagreement over a mere historical question, atheists and agnostics who agree that there are many myths about Jesus in the Gospels should likewise agree that the Jesus pictured in the Gospels (and the NT for that matter) is a myth. If we must take it all at face value then such a person described there did not exist.

The Jesus of the Gospels is a myth. Such a person never existed.

Now that's a major agreement between us and it goes against the largest religious group opinion in America, evangelicals. Let us then herald this agreement loudly and clearly.

The Jesus depicted in the Gospels never existed.
Anonymous at 8/15/2010
Share