The New Evangelical Orthodoxy, Relativism, and the Amnesia of It All 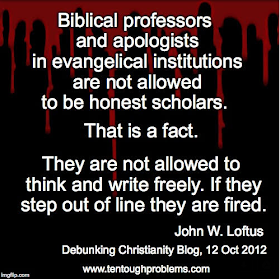 I'm happy to have lived long enough to see that evangelicals are now embracing Karl Barth. I've personally seen how theology evolves. Back in my seminary days one issue of interest was Neo-Orthodoxy, stemming from what most people think is the greatest theologian of the last century, Karl Barth. Wanting to be on the cutting edge I did my master's thesis on his doctrine of the word of God, since Barth sparked a debate among evangelicals over inerrancy. Harold Lindsell's book, The Battle for the Bible, was heavily discussed among us. Evangelicals did not like Barth and neither did I. Due to the onslaught of nineteenth century biblical criticism Barth was forced to deny natural theology and basically argued that although the Bible contained myths and legends, God still speaks through it. For Barth, the word of God was not to be located in the Bible itself. No. Rather, God speaks through it. God's word, his revelation, takes place when God speaks to his people, and he can do so through myths, legends, and even a Russian flute concerto. It was described as the New (or Neo) Orthodoxy. It was all he could do to maintain his faith. To read up on those good old days see Robert Price's Inerrant the Wind: The Evangelical Crisis in Biblical Authority,

where he made some predictions at that time which have proved to be true.

After the dust settled the evangelical reaction to Barth became nuanced and mixed. Aside from the debates about the Bible, the main thing evangelicals came to understand was that the real issue is hermeneutics. They argued that a text could be inerrant so long as it was understood according to its genre and context. So guess what? Evangelicals can now argue that the creation accounts in Genesis (1-2) are myths because they weren't meant to be taken literally after all, while still maintaining the Bible is inerrant. They can deny there is a hell since that too is considered mythical. They can even embrace universalism. See the mental gymnastics here? The flood gates were opened. Anything that seems non-historical in the Bible is just waved off as an mythical story with a point, somewhat like a parable. No contradiction here, you see.

All one has to do is consider the writings of John Walton, Kenton Sparks, and Peter Enns for starters. There are others like Christian Smith in his book The Bible Made Impossible: Why Biblicism Is Not a Truly Evangelical Reading of Scripture.

What's interesting is the recommendation of this book by Scot McKnight, who has solid evangelical credentials:

If this trajectory continues it won't be long before evangelicals will embrace the kinds of things professor Mark Roncace writes in his book, Raw Revelation: The Bible They Never Tell You About.

Of this book we read,

The Bible is dynamic and powerful. But the Good Book isn’t always good. It can be confusing, disturbing, and sometimes downright ugly. So it’s been censored. It’s been robbed of its beauty and truth . . . by the church. Preachers of every ilk and denomination cook the Book, boiling away the unsightly and unpalatable passages. They never tell you that God can be a misogynistic, genocidal maniac, that Jesus encourages self-castration, that the Easter stories in the four Gospels are incompatible, that Paul was wrong about Jesus’ second coming, and that the Bible does not forbid abortion or premarital sex.

Feminist theology is being embraced by these new evangelicals, as is Emergent Christianity, as is evolution. What's to stop evangelicalism from becoming liberalism? Nothing. So the old kind of evangelicalism can only be maintained by censoring and firing these progressive evangelicals.

As I said, theology evolves. It's what we would expect to find if there is no truth to it. It's what we would expect if there is no divine mind behind the Bible or the church. If there is a God then his so-called progressive revelation is indistinguishable from him not revealing anything at all. It also leads to theological relativism, since there is no point in the history of the church where any theologian can say that a final unchanging theology has been attained. That's what the whole idea of progressive revelation entails, since God supposedly reveals the truth to each generation. So the theology of yesterday was true for them, as the present-day theology is true for others, as the theology of tomorrow will be true for still others. So don't talk to me about an unchanging theological truth. Don't talk to me about an absolute standard for theological truth either. It doesn't exist. Never has. Never will.

So when I critique the Genesis creation accounts I'm met with some laughter, just as when I argue against hell. For these younger evangelicals think I'm arguing against a straw-man no one believes anymore. They don't realize that they are the ones who have adopted a changing theology as if it's always been the evangelical orthodoxy. What they fail to understand, because they are young, is that their views would have caused them to be booted from the pulpits of churches and the lecture halls of seminaries across the land in the previous generation.

Evangelicalism, just like all religion, is changing due to global/cultural influences, biblical criticism, and especially science.

As but a few more examples influencing the new evangelical orthodoxy, touch the covers of the following books:

Philip Jenkins in The Next Christendom: The Coming of Global Christianity.

Philip Jenkins in The New Faces of Christianity: Believing the Bible in the Global South.

Soong-Chan Rah in The Next Evangelicalism: Freeing the Church from Western Cultural Captivity.

Phyllis Tickle in The Great Emergence: How Christianity Is Changing and Why.

Phyllis Tickle in Emergence Christianity: What It Is, Where It Is Going, and Why It Matters.

Brian McLaren in A New Kind of Christianity: Ten Questions That Are Transforming the Faith.

Then there is the influence coming from some excellent women's studies:

What will evangelicalism morph into? Liberalism. It's already here. It's only a matter of time. And when it does amnesia will set in. They will think this is true Christianity.

Their delusion is never more clear. They will do and say anything to maintain their faith because faith is always unreasonable. It's always a leap over the probabilities. And then in the future another Alvin Plantinga will arise claiming that this new Christian evangelical orthodoxy is a "properly basic" belief system. What utter hogwash. Plantinga's arguments are nothing but Fundamentalism on Stilts, and could be used to defend any Christianity or religion for that matter.
John W. Loftus at 12/05/2012
Share