The Immorality of Salvation 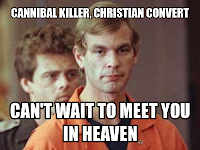 The Christian concept of salvation is an immoral one.


im•mor•al
adjective
1. Violating moral principles; not conforming to the patterns of conduct usually accepted or established as consistent with principles of personal and social ethics
Dictionary.com

Before I tell you why, let’s set the scene. Christianity teaches humanity is doomed to go to Hell where the god Yahweh will do Very Bad Things to them, forever. Why is humanity doomed? Well, apparently, Yahweh did a product launch - Humans 1.0 - without doing adequate beta-testing (perhaps he runs Microsoft also). His product didn’t function quite like he wanted it to.  A skeptical talking snake proved more persuasive than an all-powerful deity, and so the prototypical couple snacked their way into the bad graces of their Sky Daddy. Rather than acknowledging his own incompetence, the Loving Creator instead cursed humans with painful childbirth, male domination of women, and a difficult life, ending in death. No second chance and no appeal process. One strike, you’re out. It’s all there in Genesis 3, if you need more details.


"The most important truth about sin is the one least recognized in our day. It is this: all sin is primarily sin against God."
Stephen Whitmer

"Sin is cosmic treason. Sin is treason against a perfectly pure Sovereign."
R. C. Sproul The Holiness of God


As Christians put it, Adam and Eve sinned. Sin consists of making Yahweh feel bad by not treating him like the super-important Being that he is, and by not doing things exactly as he orders you to. If you hurt the deity’s feelings, you will force him to do Bad Stuff which he can’t be held responsible for . Stuff like creating a fiery torture chamber where he can supernaturally keep people alive, while torturing them for eternity. This is one of the truly great miracles of Christianity which has not received the attention it deserves: that a god can be completely loving, while simultaneously being a wildly enthusiastic sadist. One of the many benefits of being a god is that you get to play by different rules than human beings, and you have the power to defy logic and reason.


“God is the only being who is good, and the standards are set by Him. Because God hates sin, He has to punish those guilty of sin. Maybe that's not an appealing standard. But to put it bluntly, when you get your own universe, you can make your own standards.”
Francis Chan, Crazy Love: Overwhelmed by a Relentless God


Now here is the really cool part. Even though this god is angry with us, and would be completely justified in inflicting the most horrible suffering on us, he is willing to cut us some slack, through the magic of SALVATION!

The explanation is a rather convoluted story of a pregnant virgin, an immortal god who dies for several days, and human sacrifice… but let me just cut to the chase.

All is forgiven if you swear your loyalty to Jesus – the authorized representative of the Angry One. That’s it. Kiss the ring of the king. Pledge your undying loyalty. Pleasure him by stroking his ego. If you do this, you’re off his shit-list, my friend.

The most amazing thing about this? It doesn’t matter if you have done horrible heinous stuff to your fellow human beings. Child abuse. Torture. Rape. Murder. Genocide. It doesn’t matter. Because let’s be honest. Don’t those things pale in comparison to the crime of hurting God’s self esteem? If you’re a careful student of the Bible, it should be pretty clear that what happens to humans isn’t that important. It’s all about Him! Think of us as useful props that he can arrange like figurines on a game board. Our main value is as mirrors that he can lovingly gaze upon his own reflection in. If we aren’t doing our job, how can he properly enjoy himself?

Okay. So that is the sin and salvation story, as told by Christianity. Confess Jesus as Lord so that God can stop being angry with you, and won’t have to torture you forever. Repent from trying to think for yourself and for doing things your way. On bended knee, surrender your mind to the Dear Leader.

The implications of this ‘salvation’ are where the immorality comes into play. Let’s do a thought experiment:

If Hitler (yes, I invoked the ‘H’ word) had accepted Jesus as Lord in his dying moments, then according to Christianity, he is now in Heaven, while the Christ-less Jewish victims of his regime are destined for the eternal fires of damnation. Hitler’s ovens only burned a short while, but the fiery torments designed by the Christian god will blaze forever. 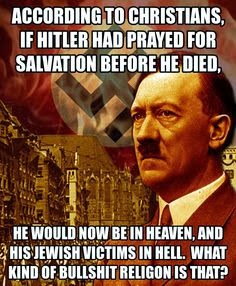 Or, how about this? Cannibalistic killer Jeffrey Dahmer repented and was baptized in prison, shortly before his death. So that would mean that he is now enjoying the joys of heaven, while the gay young men he killed and will suffer the torments of Hell.

Does this make any sense? How can we regard this as anything but a perverse mockery of justice? I know, I know. Christians will complain “You can’t evaluate God by human standards. Who are you to pass judgment on God?” My reply? Stop calling your god good and loving and moral, if you are going to insist that those words suddenly lose their everyday meaning, or indeed, mean the opposite, when applied to the corrupt sadist your worship. The only reason you don’t want to use human morality when evaluating the god depicted in the Bible is because his actions reveal him to be an immoral monster.

Let’s revisit Hitler one more time. What if, instead of killing himself, he surrendered? What if President Harry Truman had told Hitler “If you swear allegiance to me, I will pardon you. You will not face prosecution for the crimes against humanity that you committed. In fact, we will make you a U. S. citizen, and provide you a house, and pay for all your living expenses.” Would that be just, or a perversion of justice? 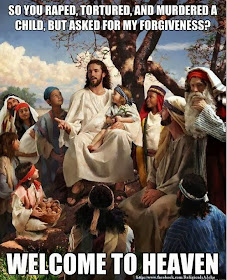 This, in effect is the salvation which Christianity proclaims. You can be absolved of all harms done to human beings, if you are willing to kiss Yahweh’s ass. This ‘salvation’ is immoral and perverse. What we would condemn here on Earth, Christians praise in Heaven. 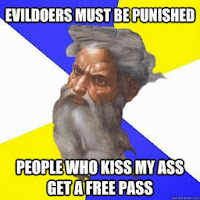 If you are a Christian and have read this far, no doubt I have offended you. No matter. You have far bigger problems to worry about, if your belief proves true. The gates of your Heaven are open to a number of serial killers. Ted Bundy converted in prison. ‘Son of Sam’ killer Daid Berkowitz is now a believer. BTK killer Dennis Raider was an Elder in his Church…

Don’t forget Jeffrey Dahmer.  He’s there waiting, probably eager to meet you.  Killer and consumer of human flesh, at one with a god enamored with countless animal sacrifices.  The god whose religion fetishizes human sacrifice.  Hanging out with the Jesus who said:

If you’re right, they’ll all be waiting for you.  Good luck.