Dr. Victor Reppert Is Our Gullible Person of the Day, Part 2


Here is my real point, which I think has gotten lost here.

There are two atheist talking points that don't mix. Here they are:

2) God of the gaps arguments are always wrong. Any gap in our naturalistic understanding of the world should be dealt with by waiting for science to produce a naturalistic explanation, not by appealing to God.

But anything God might do to reveal his existence could be dismissed as a gap, thus leaving the atheist unaffected. The ban on god of the gaps arguments would allow the atheist to escape no matter what God did to convince us of his existence.


There is a whole lotta ignorance going on with Vic's comment. Let me just focus on one thing, the gaps argument itself. In the first place why does Vic focus on gap arguments with his comment, because in part 3 you'll see that's what he does. Why doesn't Vic just present the evidence? Forget any discussion of the gaps. Just present the evidence! I'll tell you why. It's because most of what he's got are the gaps to his god, that's why. Keep in mind his comment was written underneath a post where I linked to multiple lines of evidence that would convince us to believe if it existed seen here. Why didn't his god provide THAT evidence? Why must Vic's god resort to gap type arguments when he had plenty of ways to convince us to believe, and did not provide it? Now Vic must rest a large part of his case on the gaps and philosophical reasoning based on little or no evidence.

Prior to the rise of science and especially with modern science, there would be nothing objectionable about allowing god of the gaps arguments. The ancients probably couldn't possibly know any differently. The whole reason gap arguments worked is because of ignorance. Wherever there is ignorance they can work. So god of the gap arguments reign whenever we don't know the answers, whenever there isn't sufficient objective evidence.

So no, it's not the case that gaps arguments are always wrong. They worked at one time. ;-) It's just that science has destroyed their plausibility. So also did the global awareness of religious diversity, when people realized these arguments could not all support a wide diversity of contradictory gods and goddesses. For it's equally clear the gods or goddesses these arguments led to are always the gods or goddesses of the person using the ignorance gap as an argument.

Reppert needs to read through the The New York Public Library Science Desk Reference. Every category and sub-category in this huge book of scientific findings were previously used as gap arguments to a god until science showed up. Let him become informed, really informed about what this means for gap arguments. 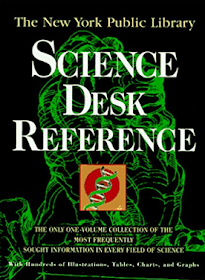 The history of science has shown gap arguments to be wrong so many times before that anyone knowledgeable about this history would be foolish to bet on them in the future. A knowledgeable person would prefer to wait on the progress of science rather than punt to one of the many different gods or goddesses or religions they supposedly inhabit.

Reppert ends up railing against scientific knowledge when railing against the ban on god of the gaps arguments. He's uniformed about the history of science. He doesn't appreciate it or value its contributions to modern life, all the while using the comforts science provides and maintaining I'm wrong to say this about him. Vic is not knowledgeable about science, or the scientific method, or how to apply it to his religious faith. He's a mere babe, an intellectual dwarf. He has even criticized the naturalistic attitude of scientists when there isn't any other alternative if one wants to know the truth about the origins, nature and workings of the universe. This attitude assumes a natural as opposed to supernatural explanation and is essential to science itself. There's nothing about such an attitude that excludes supernatural results as I explained here. Findings on prayer could be detected despite operating under methodological naturalism.

More importantly for our purposes, any god who wants us to reasonably believe or be damned would never have allowed science to progress as it has by answering a slew of questions about the universe which he did not reveal, showing us science can do better than revelation, much better, since there's nothing revealed in the Bible about our universe that predated a scientific discovery. This god didn't even tell us about the scientific method. And his god still wants us to believe or be damned? No, such a deity has shot himself full of holes.

But wait, is a ban on gap type arguments too extreme? Let's just use evolution as our example. It's been called the greatest scientific discovery of all time, backed by overwhelming scientific evidence. It was completely unexpected a few centuries before. But if science can explain how life evolves then it can probably explain anything else needing explained with regard to the origin, nature and workings of the universe(s). In fact, there's no other alternative. If science cannot solve future questions about the universe then nothing else can. Reason calls upon us to wait, especially since there are other ways a deity could have convinced us to believe apart from the gaps.

But if Vic believes there are gaps that can reasonably lead to his particular god, let him do this exercise for us:

1) List some important gaps you think will never be solved by science.
2) Show why it's fruitless for scientists to keep exploring these gaps, since you're saying science cannot solve them.
3) Show why #2 isn't being a science denier who would applaud cutting off funding for such scientific research.
4) Show why each listed gap is harder for science to explain than it was to explain how life evolved. Your prized argument from reason reveals a great deal of ignorance about evolution, which is my point here, ignorance. No, humans don't reason well. We reason enough to survive and that's it. Cognitive biases show this conclusively. That you're unwilling to bite the bullet about what this means for metaphysical freedom is irrelevant, in the same way as no reasonable person should reject the overwhelming evidence for evolution because it entails there isn't an absolute morality.
5) Show how these gaps lead to your particular evangelical god, despite the failure of natural theology.
6) Then provide evidence your god is not the one you created, and not just the one you inherited in the Christianized west with your particular cultural influences.