…enough for them to just say, “NO” 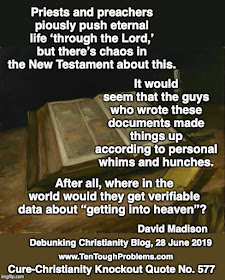 In The Adventure of the Final Problem, published in 1893 in The Strand magazine, Sir Arthur Conan Doyle killed off Sherlock Holmes. Twenty thousand enraged fans canceled their subscriptions to the magazine. When Doyle published The Hound of the Baskervilles in 1901 (he set the story before Holmes’ death), there were 30,000 new subscribers instantly. It is just a fact that humans make huge emotional investments in stories; more modern examples include, of course, Downton Abby, Harry Potter, and Game of Thrones.

Good fun, right? But religion has demonstrated a particular talent for exploiting our attachment to stories; even I appreciated Father Andrew Greeley’s charming description of the role of stories in Catholic piety. Obviously, however, many different, competing religions have claimed that their stories hold the key to achieving favor with the gods, and above all, for escaping death. Christianity has specialized in the eternal life promise: “You’ll get there if you just do this.”

But that’s where things get dicey, and Christians don’t seem to notice or even care very much that there’s no agreement in the Bible on how to get there. There are websites devoted to the plot flaws in Harry Potter, and even Harry Potter fan enjoy them because they accept that the world of Hogwarts is fantasy. Christians aren’t so bold; the emotional investment in their stories is extreme, since eternal life hangs in the balance. There are websites and stacks of books devoted to the plot flaws—the egregious flaws of all kinds in Christian theology—but the loyal Christian laity don’t want to go there. Take a look under to hood? No thanks.

Sure, priests and preachers piously push eternal life ‘through the Lord,’ but there’s chaos in the New Testament about this. It would seem that the guys who wrote these documents made things up according to personal whims and hunches. After all, where in the world would they get verifiable data about “getting into heaven”? We have to laugh at devout folks who get all excited about Near Death Experiences—but neglect to study the science of this brain phenomenon. Evangelicals especially should be suspicious, because people from all kinds of religions have had NDEs, and are sure their own brands of heaven are real, including those with no hint of Jesus Christ waiting for them in the light.

So what are the whims and hunches about eternal life that we find in the New Testament? The apostle Paul wrote the earliest documents preserved in the NT, and this classic assurance is found in Roman 10:9: “…if you confess with your lips that Jesus is Lord and believe in your heart that God raised him from the dead, you will be saved.” Someone once said that “Amen” is Christian for abracadabra, and Romans 10:9 qualifies as well, i.e., say and believe that a supposed event once happened…and the magic happens.

A few decades later when the gospels were written, other theologians suspected that there was more to it. In Mark 10 we read that Jesus was asked by a man, point blank, what he had to do to inherit eternal life. Jesus listed the commandments, and was told, “Yes, I’ve done all that.” Then we read one of the most famous verses in scripture, v. 21: “You lack one thing; go, sell what you own, and give the money to the poor, and you will have treasure in heaven; then come, follow me.” Of course, most Christians aren’t too keen on this, but even so they sense that getting to heaven depends on behavior. Hasn’t this always been the gut reaction: you have to deserve to get in? St. Peter is at the Pearly Gates, looking over his ledger to add up your good deeds and bad deeds.

And Matthew 25 presses the same point in this beloved scripture:

And what’s the reward for compassionate behavior? “Come, you that are blessed by my Father, inherit the kingdom prepared for you from the foundation of the world…” But for those who didn’t behave decently: “You that are accursed, depart from me into the eternal fire prepared for the devil and his angels.”

The Parable of the Rich Man and Lazarus in Luke 16 also makes the point that indifference to the needs of others can get you locked out of heaven:

“There was a rich man who was dressed in purple and fine linen and who feasted sumptuously every day. And at his gate lay a poor man named Lazarus, covered with sores, who longed to satisfy his hunger with what fell from the rich man’s table; even the dogs would come and lick his sores.”

When the Rich Man died, he found himself in Hades, while the poor man was in the ‘bosom of Abraham.’ The Rich Man begged that Lazarus be sent back to the land of the living to warn his relatives, but his request was denied:

The apostle Paul would have been horrified: this is an endorsement of Old Testament law as the path to salvation. Do the right things according to Moses and the prophets.

And here’s a bit more chaos: Would a great moral teacher—supposedly the best ever—believe that people who lack compassion end up in eternal fire? Jesus deserves demerits as well for a saying in Mark: “…whoever blasphemes against the Holy Spirit can never have forgiveness, but is guilty of an eternal sin.” (3:29) Hmmm…isn’t that a bit extreme?

With the appearance of John’s gospel, the last one written, yet another theologian weighed in on how to get to heaven. What would Christians do without their very favorite verse?

“For God so loved the world that he gave his only Son, so that everyone who believes in him may not perish but may have eternal life.” (3:16, of course)

They don’t seem to notice its brutality. Of course, if you’re in the Jesus cult, why not put down, and look down on those on the outside? If you don’t believe in God’s only son, you will perish. Since most humans who have ever lived don’t qualify, how can this not be bad theology? And if forced to think about it, I suspect that even many Christians would admit, “No, that can’t be right.” You mean the Bible gets it wrong? This is a sampling of the broader Bible chaos on this issue to how one qualifies for eternal life.

Cult fanaticism finds its ultimate expression in John 6:53-57—and, Yes, I keep hammering on this text because Christians should own what they find in the Bible—or disavow it and move on.

Here an ancient theologian has fully embraced magical thinking with this text: eat divine flesh and drink divine blood and abracadabra, you win eternal life! Folks who missed their classes in critical thinking fail to see through the gimmickry.

Even a casual comparison of John and Mark’s gospels illustrates Bible chaos abundantly. John created long expanses of Jesus script missing from the Synoptics, of which Mark is the foundation. How could it be that Mark’s eyewitnesses missed all these speeches? Well, they didn’t; John made them up. Mark claims that Jesus spoke only in parables, “…he did not speak to them except in parables, but he explained everything in private to his disciples.” (Mark 4:34), yet there are no parables in John’s gospel. Mark’s Jesus eats a Passover meal (The Last Supper) with his disciples, yet in John, Jesus dies the day before Passover.

“For I received from the Lord what I also handed on to you, that the Lord Jesus on the night when he was betrayed took a loaf of bread, and when he had given thanks, he broke it and said, ‘This is my body that is for you. Do this in remembrance of me.” In the same way he took the cup also, after supper, saying, ‘This cup is the new covenant in my blood. Do this, as often as you drink it, in remembrance of me.’”

Paul assures his readers in Galatians 1 that he didn’t get his information about Jesus from the disciples; he got these ‘last supper words’ from his visions. A few decades later this script found its way into Mark’s account of the Last Supper (he never claimed to have eye-witness reports). But John omitted them from his version of the Last Supper. He put Jesus’ grotesque ‘eat-me’ command earlier in his story, when Jesus was preaching at a synagogue in Capernaum.

Lay people commonly don’t read the New Testament carefully enough to notice all this chaos; Christian apologists have been kept busy for centuries trying to reconcile the mess. And, by the way, Paul’s claim in Galatians 1:11-12, should be a defining Houston-We-Have-A-Problem moment:

“For I want you to know, brothers, that the gospel that was proclaimed by me is not of human origin; for I did not receive it from a human source, nor was I taught it, but I received it through a revelation of Jesus Christ.”

Yes, he got those ‘last supper’ words of Jesus through his visions of a dead man. How can that not be a problem? But his original readers in the Jesus cult would have trusted Paul’s visions more than anything else. Their holy man was truly tuned into God. He said so himself.

This is a problem for curious people who want the facts, to sort out the truth. The boastings of Holy Men can rarely be trusted, because the Holy Men commonly disagree with one another. And usually have decided that women can’t be admitted to the Holy Club. When the Holy Men cobbled the Bible together, no one created a Due Diligence Committee to check for blunders and contradictions, to make sure that the Holy Scriptures told a seamless story. So, not surprisingly, the examples of Bible chaos go on for miles.


David Madison was a pastor in the Methodist Church for nine years, and has a PhD in Biblical Studies from Boston University. His book, Ten Tough Problems in Christian Thought and Belief: a Minister-Turned-Atheist Shows Why You Should Ditch the Faith, was reissued last year by Tellectual Press with a new Foreword by John Loftus.

The Cure-for-Christianity Library© is here.
David Madison at 6/28/2019
Share